You are here: Home1 / Biography 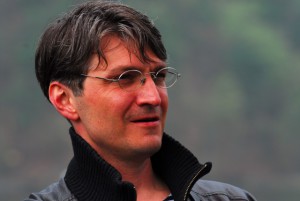 Jan’s ability as a film-maker was confirmed by his “sci-fi ecology” documentary dealing with a “newly discovered species”, supposedly flourishing in the devastated region of the then Northern Czechoslovakia. In 1989, Oilgobblers received the most prestigious prize in its category, the American Academy of Motion Picture Arts and Sciences Student Oscar® for the best foreign film.

Two years later Jan Sverak completed his feature debut Elementary School. His father Zdenek Sverak wrote the screenplay and acted the main character in the film.  In 1992 this heart-warming period film set in post-war Czechoslovakia was nominated for the Academy Award® for Best Foreign Language Film.

Jan Sverak directed Accumulator 1, an action fantasy about television’s vampire-like capacity to suck out a person’s life-force and deplete their energy, which he wrote with Jan Slovak.  Zdenek Sverak worked with the two young authors on the dialogue for the final version. At the time, the film with its budget of over 1,4 mil. EUR, was the largest scale Czech production ever. It was awarded the Media Prize at the 1994 Venice International Festival and received the Grand Prix at the International Festival at Yubari Fanta in Japan. On home territory the popularity of the film brought Jan Sverak the Czech Lion Prize, awarded by the Czech Film and Television Academy for the most popular film of the year.

Jan Sverak’s road-movie The Ride was also a hit with audience in the Czech Republic.  He wrote the screenplay of this ultra low-budget film with his college mate Martin Dostal.  Since its first release, the film acquired an almost cult status and for more than a year it was one of the top Czech box-office hits.  Jizda received the Crystal Globe, the main prize at the 30th International Film Festival in Karlovy Vary in 1995.

Kolya, Jan’s first collaboration with producer Eric Abraham, was scripted by his father Zdenek Sverak again, who also stars. In 1997 Kolya won the Academy Award® for Best Foreign Language Film and Golden Globe Award® also. Another movie written by his father, Dark Blue World, was premiered in May 2001. Another his movie, Empties, premiered in March 2007 was written and also stars Zdeněk Svěrák.

Jan is a member of the Academy of Motion Picture Arts and Sciences and the Czech Film Academy.