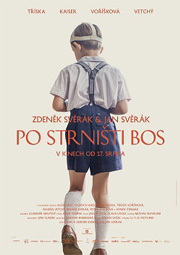 Eight-years-old Eda is a long-desired and anxiously protected child by parents who had lost one baby before. Now Eda became backup child; he even has the same name. After his father rejects to affiliate with Nazi invadors of Czechoslovakia in 1939, the family is forced to leave Prague and spend war times living with relatives in the countryside.

Little town where Eda used to spend short holiday only, becomes his home for a while. The war provides various adventures to Eda whose childish eyes can not percieve danger of difficult times. For him life feels strange but beautiful now – city boy lives in a tiny town, joins local boyish crew to spend days walking barefoot, notices beauty of girls for the first time and discovers both deep family secrets and his own bravery.

Barefoot is lyrical feature film about childhood and heroism of ourselves.